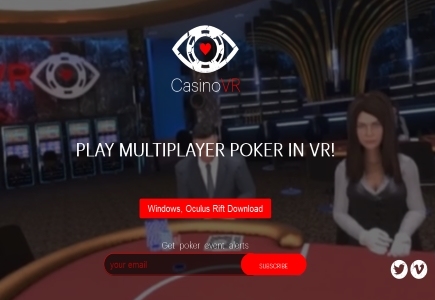 We saw the first Virtual Casino launch last year at SlotsMillion and it was a true innovation in the world of iGaming. The Slots are brought to life in a new way but what about poker players? There's no need to worry because you will not be left behind in the new wave of virtual reality to hit the online gambling market. A company known as CasinoVR has released a free to play VR poker app, the first of its kind for the poker market, which is destined for real-money play.

The product is currently in the beta testing phase but you may be wondering what's in store for you.

The company rolled out a new version of its Casino VR: Poker product, which was improved support high speed tournaments.

The company blog gave some insight into the updates made to its VR poker product.

“A new structure to handle VoIP or Voice Communication. If you are sitting at the table, you only hear other people at the same table and the people that are standing. If you are standing, you hear everyone. We found that this structure was best to have little noise but also permit users hollering to all tables for updates or seat requests.”

· Corrected the dealing of cards to each player so now everyone is dealt one card at a time.

To fully experience the product, players will need the Oculus goggles but it may be played without them. Texas Hold'em is currently available with additional games planned for the future.
Poker Software Back to articles