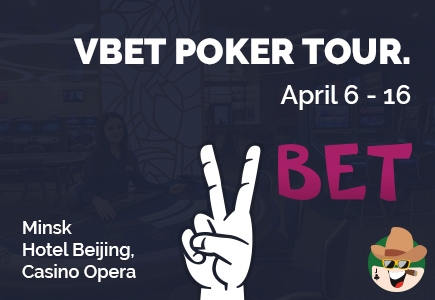 Poker players from all around the world will gather once again at this year’s prestigious Russian Tour held in Minsk between April 6th and April 16th which is hosted by Vbet. By revealing an entirely new concept, RTP will feature a new stage at Beijing, the capital’s finest five-star hotel and casino. Luxurious and expensive cash games are live at the Opera 24/7 and this time, the accommodation will be more affordable than ever before. Two qualifying events will be held by Vbet including RPT300 and main online satellite with a buy-in of $990. No additional charge from the prize fund will be applied and the event will take place in the renowned land-based venue. Additionally, the organizers have taken the wishes of participants from previous tournaments into consideration and made certain changes in the schedule. Thanks to a newly deployed format, the main event will continuously increase the number of participants and prizes. Likewise, players will be able to join the event in three different stages, whereas the minimal stake is capped at $82 USD. At the beginning of the series, punters will compete for a guaranteed $50,000 cash prize during RPT300 with a $330 buy-in! As a special surprise, hosts will draw tickets for both major tournaments and a package with hotel too. Also, a larger number of satellites has been announced, so head to the site and take a closer look at the schedule. Aside from RPT300 and the Main Event, players will have the opportunity to participate in Russian Deepstack Open, Superknockout Event, Omaha Knockout and Omaha Freezout Events, Under Pressure Knockout, Monster Event, 7 Max Knockout Event and more. The length of each level is between 20 to 30 minutes and stacks range from $15k to $50,000! Cash games, parties, sports competitions, karaoke battles and football tourneys on PlayStation are also part of the program. Good luck...
Live Poker Tournaments Back to articles