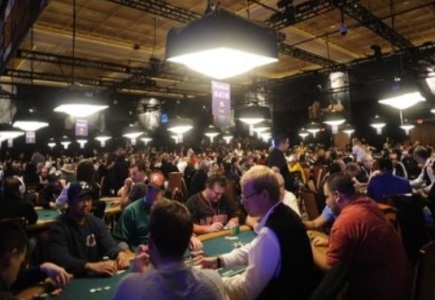 27 survivors remain, two ladies among them

As the Day 6 of the 43rd World Series of Poker main event unfolded, it became obvious that the action will be intense and long lasting. And this is exactly what happened, as the day ended with just 27 players remaining at the last three tables, from the starting 97 players at the beginning of the day.

At that point every survivor could look forward to a cash of $62,021 or more â€“ a nice comforting prize for those who weren't lucky enough to remain in the competition for the $8+ million main prize.

Among those were the names of Gavin Smith, Dung Nguyen, Erik Cajelais and Susie Zhao, one of the last five women still in the field, her nemesis, Isaac Barron, Vanessa Selbst and Marcia Topp, Eric Buchman.

Ladies, of whom Gaelle Baumann and Elisabeth Hille still remain in the competition have already attracted a lot of attention, particularly Norwegian Hille, whose participation was a bit out of the ordinary.

Namely, it appears that, since Hille was not able to qualify via satellites for the main event, her boyfriend Harald Olsen, who won a seat in one of the earlier events and reached a $20,000 cashout, staked her buy-in. This may turn out to be a very smart move, having in mind the extent of the payout she might reach â€“ at the moment she's likely to hit a pay-day in excess of $294,601.

Some other, post-dinner departures included the last Brit and the last remaining 2011 main event final table contestant standing - Sam Holden who busted out in 55th place, David â€œODBâ€ Baker, Leo Wolpert at 50th, Amit Makhija at 47th, and Tristan Clemencon at 46th, Uruguay player Fabrizio Gonzalez in the 45th spot (with a $191,646 payday), along with Amnon Filippi at 39th, Omar Saeed at 37th, and Erik Hellman in 28th place for $236,921.

The feminine part of the competition, Baumann and Hille, are there, with Hille in fifth place and Baumann coping with a lower chip stack after taking a big hit.

Day 7 begins on Monday at 1:00 pm PT, and will continue until the main event final table of nine players is reached. The first nine players who bust will benefit from $294,601 each, and the big nine finalists will be guaranteed at least $754,798.

The top chip counts look like going into Day 7: