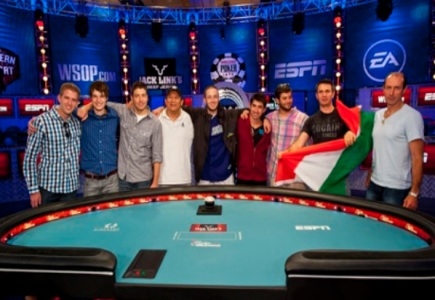 No women make it to the final nine, though The final table has been reached in the World Series of Poker main event, after escorting two of the biggest surprises in the competition so far - Norway's Elisabeth Hille and France's Gaelle Baumann, who busted out in 11th and 10th position, respectively. At the beginning of Day 7, the final day before the grand finale in October, there were 27 players still in competition, headed by chip leader, Canadian pro Marc Ladouceur. A majority of players was from the USA (19 players), then there were three Germans, and one each from Australia, Norway, France, Hungary and Canada. Among those eliminated early on were Nicco Maag in 27th place and Jan Heitmann in 26th place, both for $294,601. After the first break, Roland Israelashvili busted out in the 25th place, followed by internet whiz Daniel Strelitz at 24th and Yuval Bronshthein at 23rd. Others included 22nd placed Cylus Watson, Robert Corcione (21st) and Paul Volpe (20th), Jamie Robbins, David Balkin, Robert Buckenmayer in the 17th and Percy Mahatan in 16th place. The chip leader at the start of Day 7, Ladouceur dropped out of the competition in the 13th spot, earning $465,159. He was soon accompanied by Scott Abrams in 12th. Then came the time for Hille and Baumann to leave the competition, both with pay days of $590,442 and both taken down by Hungarian player Andras Koroknai. As for the top nine, who will return in October to the Rio to fight for the massive main prize in the 43rd World Series of Poker main event final table, their chip counts are the following: 1 Russell Thomas 24,800,000 2 Jacob Balsiger 13,115,000 3 Jeremy Ausmus 9,805,000 4 Steven Gee 16,860,000 5 Greg Merson 28,725,000 6 Jesse Sylvia 43,875,000 7 Robert Salaburu 15,155,000 8 Andras Koronai 29,375,000 9 Michael Esposito 16,260,000 In related news, and very good ones for Elisabeth Hille, Betfair signed the young Norwegian as a Team Betfair Ambassador. According to a Betfair spokesman, Hille will join Betfair Poker's growing stable of Poker Ambassadors, which includes UK Ambassador John 'kunku wap' Tabatabai, 2008 WSOP Main Event Champion Peter Eastgate and Canada's Jonathon Driscoll, in the role of Poker Ambassador for Norway.
General Poker News Live Poker Tournaments Back to articles