The State of Online Poker in the United States 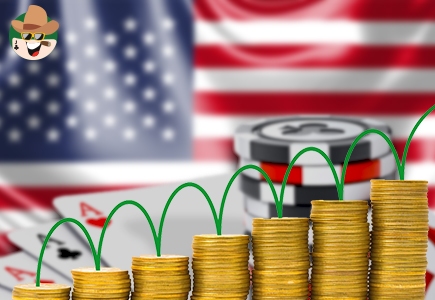 Pundits, and advocates for online poker rely mainly on the aspect of its potential tax generation it could provide for cash strapped states. In times when states are desperate to raise money for budgets, online poker and gambling in general has become one of the primary avenues.

But is online poker really the answer to saving a state's budget? If we look at the latest stats, the answer is surprisingly no.

Live poker remains strong, and some say stronger than ever. Many casinos are reporting their highest numbers in years, and even creating new poker rooms in order to cater to their expanding market. Online poker isn't faring so well.

Table games, and slots will always provide the majority of revenue for casinos. Poker is somewhat of an afterthought. Smaller casinos choose to not even offer a poker room since the revenue they could generate doesn't warrant paying for that expense.

This also holds true for online casinos. They operate in much the same way as live casinos. Poker is more of a luxury offered, but the idea is to get those poker players in to the casino section where they can make their money.

Prior to June, online poker looked poised to make a push in the United States. Once PokerStars entered the market, players flocked to the tables like mad. All poker rooms saw an increase in traffic thanks to PokerStars.

That poker boom was very short lived however. Deafening short in fact. And so short, that it could be a sign that people aren't really interested in playing online poker in the US anymore. But we will leave that debate for another story.

With stats in for June, we can see that online poker is falling to the way side. Not one site has seen an increase in revenue, and some even report a 30% decrease. These numbers are a bit skewed since revenue spiked to its highest numbers ever when PokerStars came to town; but a 30% decrease at any time is never a good sign.

Year to date has seen a 7% increase from this time last year, but again, this number is being padded by PokerStars. If we remove the increase of traffic due to PokerStars, there would be a significant decrease from year to year.

On the flip side, online gambling is growing steady and looking to continue its growth. Casino revenue is up 47% across all sites in New Jersey compared to last year. But sites like the Tropicana are seeing a decline in revenue due to such large drops in poker revenue.

Even though casino numbers are up, poker is so weak that its dragging down the overall books. Its clear something needs to change. Be it a fully regulated market in all states, and pooled players; we should see a change happen very soon.