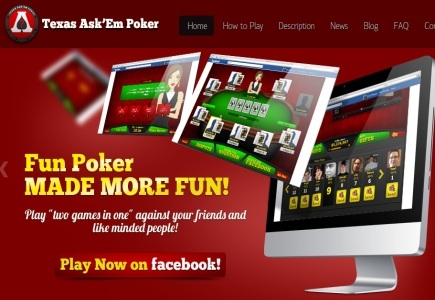 This week, at the Dublin Web Summit, OteetO, an Irish social games developer, is planning to launch the mobile app version of its popular Texas Ask'Em Poker game.

The new iPhone app will be available for free and with no real money on the line, though in-app purchases will provide revenue for the game's developers.

Texas Ask'Em Poker is a card game with a trivia twist: two cards are dealt to each player to start, but before their hand is revealed they must answer a multiple choice question as quickly as possible, and the fastest correct answer ranks first and receives the best hand.

It continues as a Texas Hold 'Em poker game where players keep their poker skills handy if they want to win and correct answers are revealed at the end of the hand, along with each players' response.

Originally launched on Facebook in May this year, Texas Ask'Em Poker players ever since have answered more than a million questions and sent more than 750,000 invites to friends.

“To be honest, we are a little concerned about some of our fans that play so often – some have answered over 35,000 questions in just four months – but it is refreshing to know that they are at least learning and having fun as they play,” said the creator of the game Neal O'Gorman, CEO and co-founder of OteetO.
General Poker News Poker Software Back to articles