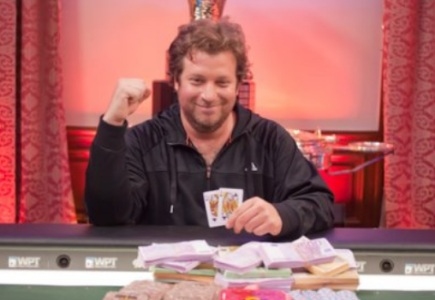 The World Poker Tour Season XI Grand Prix de Paris at the Aviation Club came to its conclusion this past weekend with the winner being Matt Salsberg, the television producer for the pay-per-view, U.S. television, channel Showtime. He held the chip lead at the beginning of the final day, and emerged as the victor after an exciting week. The final day's table sorted through an initial 228 players. The following players plus their chip totals leading up to that final table were as follows: Matt Salsberg 1,757,000; Mohsin Charania 1,435,000; Timothy Adams 1,198,00; Theo Jorgensen 1,169,000; Philipp Gruissem 776,000 and Fabian Quoss 570,000. Danish champion Theo Jorgensen was initially the underdog, but that soon changed when he took the chip lead by winning a colossal hand against Timothy Adams. Jorgensen adeptly leveraged his lead as he advanced through the field and then came up against Salsberg with only a minimal lead. Jorgensen expanded his lead over Salsberg as the final game proceeded, and it appeared that Jorgensen would take the game with a 4-to-1 advantage, but then Salsberg doubled, continued to build impetus until he regained the chip lead, and with deftness was able to overtake Jorgensen. The Euro 400,000 First-Place is Salsberg's biggest career earning thus far, surpassing his previous top prize of $100,000. The Grand Prix de Paris score for Salsberg also secured him a $25,000 seat in the World Poker Tour World Championship in May 2013.
General Poker News Live Poker Tournaments Back to articles