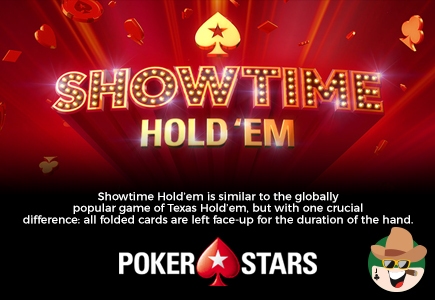 One of the world's busiest gaming networks, PokerStars, has launched an entirely new version of the popular game of skill and named it, Showtime Hold'em. The latest release enters the market after Split Hold'em rolled out due to a misfortunate trial that recently ended. By integrating a twist on traditional features during the game, the group wants to engage current players to think outside of the box and eventually bring back those who gave up due to the monotony of poker.

Up until now, if a player would surrender his or her cards, the remaining punters were never able to see them, as they simply disappeared never to be heard or seen again. However, thanks to a slight improvement, those cards will be revealed for all to see in the new release, said Dan Price, Ring Games Manager. If you're familiar with No Limit Hold'em, it will be extremely easy to understand how the new feature works. As soon as you fold, your cards are shown to your opponents, remaining that way for the rest of the hand. This will help all players question their strategy, since both the conservative and agressive gamers must choose between bluffing and folding more often than usual.

According to Severin Rasset, director of poker innovation and operations, the enhancement is all about adjusting to changes rather than valuing a hand on two separate boards. At present, Showtime Hold'em will have to run on a trial basis and early media release will include a six-hand table with a max buy-in of 80 big blinds. Rasset adds that seeing all folded cards can introduce fascinating strategic adjustments of players, which are always a pleasure to watch and learn.

Famous poker players, Lex Veldhuis, Fintan Hand and Ben Spragg are candidates to participate in the upcoming Twitch Invitational tournament, however, one of the champs left a funny comment regarding the new game and said that people are simply going to see how pathetic his game is while playing. Still, the mechanics of the game aren't changed and competing in a new version of Texas Hold'em should be quite a fun experience, added Spragg.