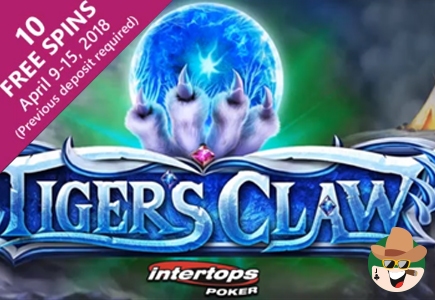 Intertops Poker is running a Game of the Week promo, kicking off April 9th and continuing through the 15th. The selected game for the 7-day stretch is Bestoft’s latest offering, Tiger’s Claw. The promo is open to all players that have made a minimum deposit of $25 between March 8th and April 8th. Those that have done so will receive 10 extra spins to try out the slot.

For those who have not yet taken it for a spin, it is inspired by a mystical realm, equipped with a shaman guiding you in your search for gems and artifacts. As a primary character, he also serves as the scatter and three of these anywhere on the screen will award a prize worth double the bet. Score four of these and you’ll get a prize worth 10X, while five pays out 50X!

Additionally, the symbol representing the game’s namesake, the tiger’s claw, has a special ability of its own. When it shows up across all five reels, a total of 8 extra spins are headed your way. When free spins are in play, they may be re-triggered for a total of up to 96 spins.

It offers a unique layout that looks like this: 3-4-5-4-3. There are three rows on both the first and last reels, four rows on the second and fourth, followed by 5 rows on the middle reel, making for a grand total of 720 ways to win!

Players may utilize a Double Up bonus game following any win for a chance to double the prize by flipping a gold coin. Those who choose to opt out can simply collect their prize.

The site’s casino manager commented, "Like all the new Betsoft games, the images and effects in Tiger’s Claw are stunning. With its free spins, Double Up bonus game and tall middle reel that gives 720 chances to win, I predict we’re going to see some epic pay-outs!"


Poker Promotions Back to articles