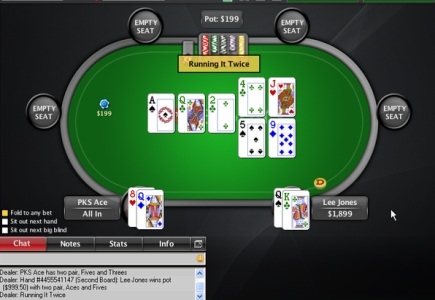 One of PokerStars' plans for the future includes introducing many poker pros' favorite 'run it twice' option, and in its latest reports, the company said it is currently performing some practical testing before the official launch. The convenient feature lets players see and play two different outcomes of a hand. The company also specified that thanks to 'run it twice', players can agree before a hand is dealt to either sweep or split a contested pot based on two different iterations of the remaining community cards, dealt from the remaining deck. Prior to this, the 'run it twice' concept could be seen in poker television shows like Poker After Dark and High Stakes Poker, but with a rule that players must be all-in before the river is dealt, and that there must be a mutual agreement to run the cards twice. In online poker, it was first employed by Merge network in 2008 and later on by Full Tilt Poker. Whether or not the option will be available on the new FTP site, owned by PokerStars, is not known at present.
General Poker News Poker Software Back to articles