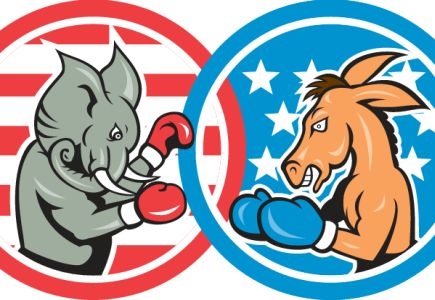 Election time is heating up in the states. With Hillary and Donald going toe to toe from now until November, we will see numerous topics brought up. At least we hope they can step away from calling each other names and focus on what actually matters by that time.

Online poker, and gambling in general may seem like a big deal for us. But in reality its rarely on the minds of politicians, especially during election year. It's rare to see anything progress when political seats are up for grabs. No one wants to bring it up since it's such a debatable topic. Usually its swept under the rug until elections are decided.

Online gambling was brought up during the past 2 GOP conventions however. Most of the time calling for a ban on online gambling. It was still an afterthought for most, but being mentioned is never a good thing, especially when its negative.

The good news this year, is that online gambling was never mentioned at the same convention.

The bad news is, Trumps vice president pick, has a history of being anti - gambling.

One would think that Trump is a supporter of all things gambling's, he did own casinos after all. The reality is, that no one knows his stance when it comes to online gambling. We do know Mike Pence's stance though.

In 2006, he was a supporter of the Unlawful Internet Gambling Enforcement Act that helped push most online poker rooms out of the United States. What's more troubling is that he penned a letter to the Indiana Congressional Delegation proposing they support Sheldon Adelson's bill to ban all forms of online gambling.

In light of all this, states looking to regulate online gambling, may decide to push through a bill faster than they had planned. Michigan, California, Pennsylvania, and New York are all states with legislation in the works. It was expected that it would be next year before anything would be complete. That may change if they fear the worse.

If Trump is elected, it's a good bet that there will be at the very least, no federal legislation to support online poker. But, as with any politician, their stance may change once elected. I don't think the next president will have much time worry about online gambling given the other issues the country faces right now.