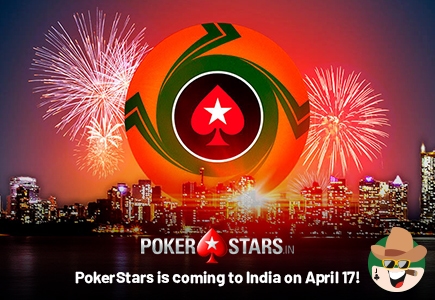 The time has finally come for India to open its cyber doors and welcome the world's best online platform for poker, as PokerStars prepares to go live in the country on April 17th. Thanks to a newly signed partnership with the Indian lottery powerhouse, Sugal & Damani Group, the company (Stars Group Inc) is ready for the next stage of global growth. Although the site will be maintained by Sachiko Gaming Pvt Ltd, the Stars Group will license the brand and provide support.

Furthermore, wagering on site will be available only to those residents who live in the Indian States with regulated legislation, since betting on poker varies due to different views on the game's nature. According to experts, poker is considered a skill game and not gambling which is the opinion in India.

To celebrate the launch on Tuesday, April 17th, PokerStars India is throwing an exclusive free-to-play tourney with a 10 Lacs prize pool a few days later, on April 22nd. Players can participate by downloading the software and creating a personal account. Buy-ins are free and the event begins exactly at 17:00 IST.

The platform will be available on both desktop and mobile devices, and the company has even announced local versions of Sunday Million as well as World Championship of Online Poker. Signature titles such as No Limit Hold'em and Omaha Poker will be the primary focus and Indian rupees are available for depositing and withdrawing.

Finally, for those who seek more excitement, PokerStars India will be launching a series of special daily Early Bird Freerolls from April 17th to April 22nd. The tournament will feature a total prize of 3 Lacs.
Bingo Society News General Poker News Back to articles