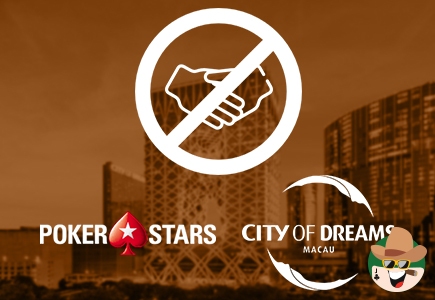 After 5 years of intense poker events and exceptionally exciting tournaments, PokerStars has ended their partnership with City of Dreams Macau. According to a local news portal, the Chinese Government has published an immediate clampdown on all poker apps in the mainland, including advertising. The International Poker Tour (IPT) in Macau is postponed until further notice.

One of the world’s biggest poker rooms has established a partnership with City of Dreams Macau in 2013, offering a great deal of premium live events in the region. However, the sudden decision of Chinese Ministry of Culture to ban all poker playing apps will definitely put a hold on high quality live events in Asia. Vice President of Corporate Communications for The Stars Group, Eric Hollreiser, commented on the current situation and expressed an optimistic point of view regarding tournaments in Asia, as there are still other casinos that provide Omaha and Texas Hold’em Poker in Macau, such as Wynn, The Venetian and others.

PokerStarsLIVE Macau has held numerous events at the City of Dreams, illustrating them as, “Asia's biggest & richest poker tournaments including the ACOP, Macau Poker Cup, Macau Millions, and APPT Macau.” Although the International Poker Tour was scheduled for May 16th, Alisports had to cancel the series. However, matches will only be delayed and re-announced as soon as possible.

In case you missed some of the latest promotional offers at PokerStars, including a £100 Million Challenge or Football Frenzy, navigate to the platform today, log in and compete for more than $2M in Stars Rewards, accompanied by special Football Chests! The offer is active from May 1st to June 11th, so don’t waste your time and win these incredible prizes by completing a progress bar while playing real money games. Good luck and all the best...

Source: "Macau Is No Longer The City Of Dreams For Pokerstars; IPT Postpones Macau Event". CalvinAyre. May 8, 2018.
General Poker News Back to articles