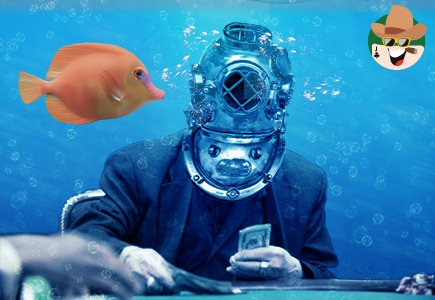 The tournament will start inside the casino, but will hold its final table under water, just off the coast of the island. Each of the final six players will go head to head; or mask to mask in this case about 120 feet below the sea water.

The final table will take place on the Lucky Lady sunken ship. Lucky Lady is a ship that was sunk and provides an artificial reef for sea life. The 324-foot tanker will now be home to an underwater final table. Players will wear scuba gear and play until a winner is crowned.

Directors for the tournament claim to have put a Craps table down there as well.

Surprisingly this isn't the first poker tournament to take place under water. In Colorado, a scuba club hosted an underwater tournament to help raise money for Veterans Helping Veterans Now, a charity to assist veterans of the military.

Ultimate Bet also held some strange tournaments back in their heyday. Their first was held under water at the Caribbean Poker Classic. The winner got to choose the venue for the next tournament as well. Juha Helppi would win the underwater challenge defeating Phil Laak among other players; and chose to host the next tournament in Finland where Helppi is from.

Finland is no stranger to gambling, or ice, or cold, or snow. The tournament was held in an ice palace built that year and featured a full bar. It later melted once the weather warmed up, becoming perhaps the first poker venue to melt away.


General Poker News Back to articles