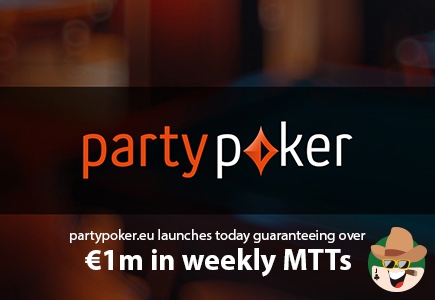 Players from France and Spain will have an opportunity to play poker together for the first time, thanks to a newly launched shared liquidity site on the PartyPoker platform. A diverse tournament schedule will from now on be accessible to players residing in both countries, according to French gaming regulator, ARJEL. Punters will once again enjoy the thrill of MTT poker, as the operator guarantees €1,000,000 every week with buy-ins ranging from €0.55 to €250. Moreover, the new weekly schedule features €600,000 in prizes for 'Progressive Knockout' MTTs.

Managing director, Tom Waters, is looking forward to bringing players from different territories together on an improved site. The launch occured on June 4th, 2018 even though the agreement was signed on July 6th, 2017. It took almost an entire year to accomplish the intercontinental liquidity pact, whereas Portugal and Italy are yet to fully enjoy the benefits of shared liquidity due to slow bureaucracy. Thanks to the agreement, French players are now entitled to a multi-table tournament schedule that is double in size.

Bertrand Grospellier, partypoker ambassador in the EU market, said that the platform will continue to host innovative, short-handed tourneys such as Bazooka, Monster, and Predator, as well as successful PKO events with even bigger announcements. The launch also allows Spanish players to participate in multi-table tournaments, since the old site was limited to cash games only.

The EU domain represents a milestone for both French and Spanish players, as access to a larger variety of games, reduced rake and bigger tournaments now becomes easier than ever. Grospellier added that PartyPoker's support to online gaming will certainly provide an unforgettable experience to players worldwide. Thanks to the company's ambition, expertise and unique business models with groundbreaking releases Double Hold'em, Omaha Hi/Lo, 7 Card Stud, and several variations of Blackjack hours of action in the following period are guaranteed.