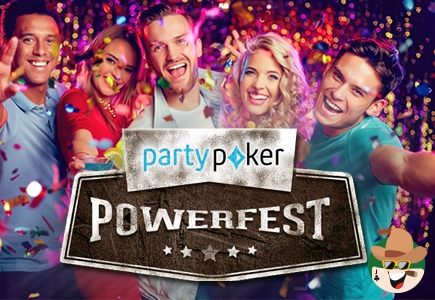 Party Poker has joined the online poker community's elite when it rolled it its first Powerfest tournament series back in February of 2016. The series was such a huge success, they did it again, and again. Coming in September, they will run a 3rd installment of the Powerfest, which will be the biggest and best one yet.

Running on the success of the Powerfest, Party Poker has just announced the 3rd edition of Powerfest with more tournaments, and more prize money.

Starting on September 4th 2016, Powerfest will feature 198 tournaments with its largest guaranteed prize pool to date of $10 million. The series will feature four levels of buy ins so that all players can participate.

Each class will have set buy ins that grow larger in each class. Featherweights can enjoy buy ins starting at just $5.50, with a high buy in of just $11. The total guarantees for the Featherweight division will be $355,000.

Heavyweight tournaments start at $109, with a large buy in of $215. The total guaranteed prize pool is $4.04 million.

For high rollers, you can play tournaments with buy ins ranging from $530, up to $5,200. Over $5.2 million in guarantees are up for grabs in this class.

To cap off the event, a 5th main event will take place on the 25th that will feature a $5,200 buy in and a $1 million GTD. This event will attract many pros, and high rollers which should be fun to watch.

Leading up to the series, a mini Powerfest will be held that features even smaller buy ins of $2.20 and lower; while still having some decent guaranteed prize pools that total $40,000.

Other than more events being added, and more prize money thrown in, Powerfest will consist of mostly freezeout tournaments. The first Powerfest was almost all re-entry, which wasn't liked by many players. Having freezeouts increased the draw for the 2nd Powerfest, and Party Poker plans to use the same format – aside from a re-buy here and there.

Satellites for the series are running daily so you can win your way to a larger buy in for a fraction of the cost.
Poker Promotions Back to articles