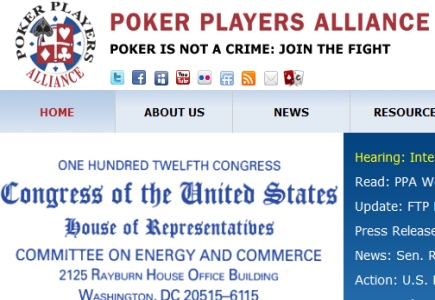 John Pappas, Executive Director of the Poker Players Alliance (PPA), whose membership is claimed to involve over a million people, with respect to legalization of online gaming asserted that a growing number of the members of the U.S. Congress are leaning toward the legalization of online poker. But he has also gone on to insist that the members of the PPA need to continue to maintain pressure and urge their political representatives to support the initiative. It was noted by Mr. Pappas: “Just six years ago, two-thirds of the U.S. House publicly and proudly voted to prohibit online poker. Today, the vocal opponents of online poker in the Congress are approaching extinction. In fact, even some who voted in favor of the 2006 prohibition are the most ardent supporters of a regulated marketplace that gives adult Americans the freedom to play poker online.” In addition he said: “In the past four years, the PPA has more than doubled the number of members of Congress who have a rating, even with a turnover of almost 100 Freshman Senators and Representatives at the start of the 112th Congress.” The rating Mr. Pappas was referring to above, to support his assertion, was from the PPA's Congressional Ratings Guide (CRG), which rates each member of Congress on his or her support for the game of poker based on the following criteria: votes and co-sponsorship of legislation, public statements, outreach to colleagues, letters to constituents, and feedback from PPA's advocacy team and PPA member meetings. The Rating Guide serves as a resource for poker advocates by providing a simple way to determine which Congress members are supportive of online poker. The CRG release coincided with the unveiling of the results of the 2012 U.S. Online Poker Survey, which was conducted by U.S. Gaming Survey and commissioned by the PPA. The results of the Online Poker Survey found that in every swing state and “election fringe state”, a great majority of respondents would be willing to vote against their registered party affiliation if the other candidate supported online poker and their declared party's candidate did not. Specifically, in Ohio and North Carolina, two battleground States in the upcoming presidential primary, 60 percent of respondents in the Survey said they would be willing to change their declared party vote. That number rose to 66 percent in Florida, a state pivotal in the 2000 and 2005 presidential elections. Overall, the Survey found that a whopping 75 percent of all respondents indicated that their votes for the House and the Senate candidate would be influenced by the candidates support, or lack thereof, to licensed online poker. With further regard to party affiliation, the Survey showed that the poker-playing community is almost an even split between Republican and Democratic respondents.
General Poker News Poker Society News Back to articles