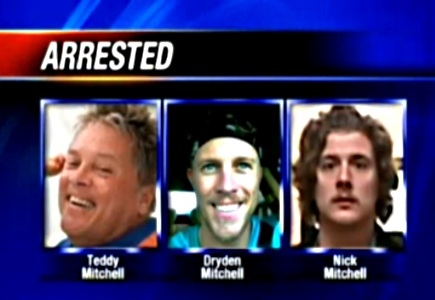 U.S. Federal authorities gave a news conference this week, providing more detail about their investigation into a "large gambling operation" and the subsequent arrest of Teddy Mitchell, his two sons and seven others.

United States Attorney Sandford Coats said at the conference that Mitchell led the gambling operation from his home in Oklahoma City offering "high stakes" poker and acting as a bookmaker on sporting events. He did so through an illegal internet gambling website, listed as the ownership of Gortation Management from Costa Rica.

It appears that the company also operated as a "clearing house" for other bookmakers in the United States, combining clients' gambling proceeds and using them to make payouts to winning customers.

Another investigation that the Mitchell family had to face in the past few years was the case of Teddy's 34-year old wife Julie who was found beaten to death in the family home in November 2010, under very suspicious circumstances, as assessed by the police.
General Poker News Poker Society News Back to articles