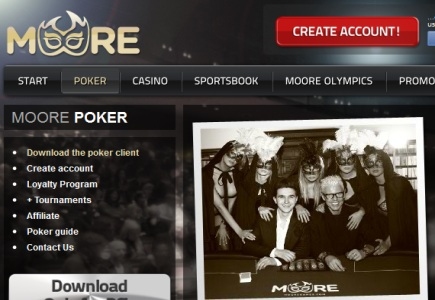 As if thousands of unpaid players of Purple Lounge, Everleaf and 5050 Poker weren't enough, a report came that a week ago Moore Games was shut down, without much explanation being offered to its players.

Samir Mujagic, the CEO of Moore Games, a skin on the iPoker Network licensed as operated by Massive Group NV under the Curacao and Malta jurisdictions, stated that network operator iPoker switched it off without explanation or any response to his queries.

When approached by media for a comment on the situation, iPoker-Playtech remained silent, thus proving that Mujagic's claims may be spot-on.

After reports of pay-out delays in the company, a player stated that he was told by Moore Games management: "We would like to express our honest apologies for the delays we encountered in processing the payments during the last 2 weeks. As you have already been informed, Moore Games worked on integrating its payment solutions with a very big iGaming operator, all this in order to make Moore Games bigger, better and with more value for its players."

Also, a person claiming to be a 'coordinator with Moore Games' said: "There's a server problem and PT needs to restart it. It's the third time this has happened and the last time they said it would NOT happen again, which it has as you have noticed. I will let you know ASAP when I have an update. FYI, there's no other problems with Moore Games, so please bare (sic) with us."

Afterwards, everyone but players seemed to go silent for days, and nothing has been heard from either operator or network. Only reports started emerging that marketing affiliates are not being paid either.

Apparently, it was learned from Mujagic that Moore and Tain operate the site's cashier facility, but that Playtech-iPoker holds the player deposits, which may keep the players calmer, as they don't want to see another operator using their deposits to get their way out of a difficult financial situation.

What will happen with the site and its players eventually, it remains to be seen.
General Poker News Poker Society News Back to articles