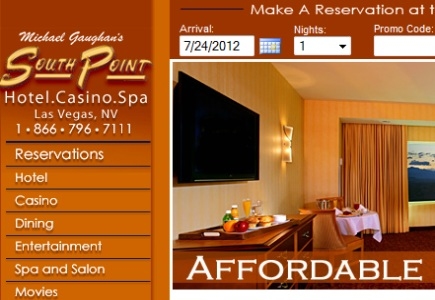 Two more companies next for consideration

South Point Casino and Monarch Interactive will be the next companies in a quest for state licensing of proposed online poker operations from a long line of 30 applicants that will appear before the Nevada Gaming Control Board at its next meeting scheduled for August 8 at the Board's offices in Carson City.

South Point is probably more high profile of the two applicants thanks to the publicity given earlier this year to CEO Michael J. Gaughan following his intention to get legally into the intrastate online poker market as soon as possible, preferably before 2012 ends.

There is an application from Gaughan Straight Holdings of Las Vegas for licensing as an operator, software manufacturer, and service provider in respect of a wholly owned company branded South Point Poker LLC that could be seen on the Board's website.

Gaughan claims his company is operationally good to go and has already been extensively and independently tested by an authorised testing agency. South Point has a free-play website up and running, dubbed South Point Poker, and once the imprimatur of the NGCG and the Nevada Gaming Commission is achieved, it will be upgraded to real money action using new software.