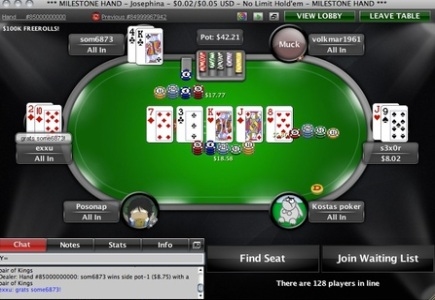 On Aug. 20, Pokerstars dealt its milestone, 85 billionth hand, awarding punters at the milestone table with $93,000 in total, in addition to the thousands of dollars given away in anticipation of the jubilee hand.

It was a six-handed 2 cent-5 cent NLHE table dubbed "Josephina" which brought great awards to the six participating players, headed by hand winner som6873 from Russia, who received an extra $26,300 along with the $36.35 in the pot, while the other five players split a bonus of $66,700.

Pokerstars noted in its blog that over a quarter million people were online when the 85 billionth hand hit.
Back to articles