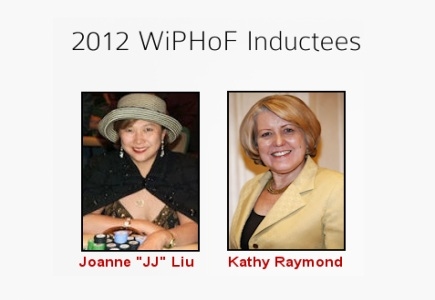 In order to make it into the Women in Poker Hall of Fame, players must be over 35 years old and must have been in the poker industry in some capacity for a minimum of 10 years. The nominees are examples of the contributions women have made to the world of poker.

This year brought about 10 nominees; however it came down to JJ Liu and Kathy Raymond.

A native of Taiwan, 'JJ' Liu, 47, came to study in the United States to obtain a Master's degree in computer engineering which landed her a job as a software engineer prior to her career in poker. She realized she had a talent for the game and pursued it.

Kathy Raymond is best known for her influence as an industry professional. Raymond spent 20 years in accounting and decided it was time to spice things up. She became a dealer in the early 1990's and by 1998 she was the Director at Foxwoods. This drastic career change led her to her current role as Director of Poker Operations at the Venetian Casino in Las Vegas.

When asked about her contributions to poker she said, 'I believe that the introduction of Deep Stack poker tournaments, which I formally introduced at the Venetian in 2007, changed the industry for the better. I was [also] the first to sign up to be a charter member of the World Poker Tour in 2002. I realized very quickly that televised hole cards would bring a whole new segment of players to the tables.'

The ceremony to induct both JJ Liu and Kathy Raymond is set for August 31st at the Golden Nugget Casino in Las Vegas.
General Poker News Poker Society News Back to articles