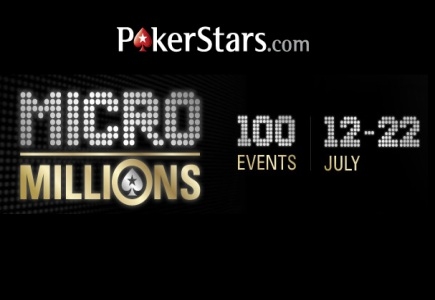 Of this number, 8,505 players received one of the prizes from the massive prize pool, with the lion's share going to players SoyDelGlobo and runner up Cokars, who agreed a heads up chop that paid them $157,218 and $130,711 respectively.

Top cash-outer was fabio_bruxo, with 39 cashes over the 100 event series. In return, he got a Pokerstars Caribbean Adventure tournament package worth $16,000.

Another interesting player was Team PokerStars Pro Andre "acoimbra" Coimbra, who played in every single event and cashed 21 times, winning a total of $431.29.

As for the traditional Sunday Millions, it attracted a total of 5,986 entrants, but it was Russian player FONBET_RULIT and runner up Leqenden who came out as winners, agreeing to a heads up chop which brought them $168,360 and $154,886 respectively.
General Poker News Online Poker Tournaments Back to articles