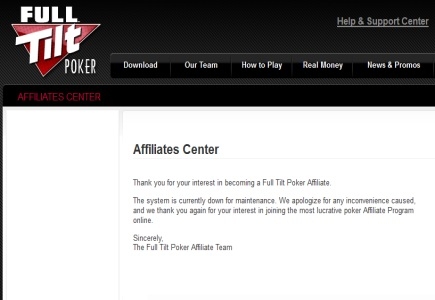 Judging by an email sent by Full Tilt Poker's new owner PokerStars to former FTP marketing affiliates, they will remain unpaid, the player accounts linked to former affiliate accounts will not be tracked, and even affiliates who were also players will see any affiliate earnings in their player accounts cut out.

This was explained by Pokerstars parent The Rational Group as a consequence of the FTP acquisition deal, which “did not assume any liabilities” of FTP beyond the obligation to reimburse non-US players.

“Therefore, previous contractual agreements that Full Tilt Poker may have had with affiliates were excluded. As such, The Rational Group is not liable and will not pay for any affiliate earnings,” it was stated in the email.

Hereby, the group said, the old affiliate relationships will not be continued, but replaced by a new affiliate program where Pokerstars and FTP will be on the same page. This program will be launched in the first quarter of 2013 when affiliates will be invited to join it.

This, of course, caused turmoil among affiliates, some of which are probably owed a lot of money. The exact amounts are not known at present, but one of the major affiliates has already filed a claim against the old FTP parent group Pocket Kings for $1.2 million.
General Poker News Poker Society News Back to articles