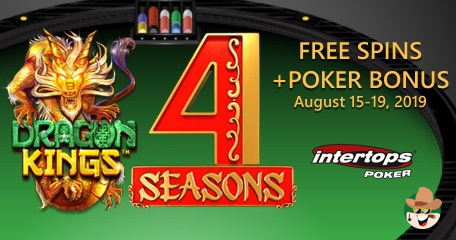 Through Monday,  August 19th, Intertops Poker is hosting a Weekend of extra spins by giving away 50 complimentary rotations and a poker bonus after they make a deposit there.

Casino manager provides his two cents on this special promotion:

“Sometimes our poker players don’t realize we have casino games. And a lot of our slots players haven’t checked out our poker room. So we thought we’d mix it up a bit with this one!”

A Weekend of Fun:

Bonus spins can be claimed for 4 Seasons and Dragon Kings – both slots are Betsoft titles and are Asian-themed. As for the poker bonus, that one can be used in any of their poker rooms OR can be used for registration for a poker tournament.

These can be claimed thusly:

Both codes can be claimed at Intertops Poker only once (each), while bonus spins can be used until August 24th. Wagering requirements on extra spins are 30x.

As far as this weekend's entertainment goes...

...Dragon Kings is packed with legendary characters and is a thrilling mix of ancient myths and hi-res technology. It was launched in the summer of 2018.

The game features four dragons that, according to Chinese myths, controlled the seas. The game itself boasts instant prizes, duplicating wilds and a unique power that can turn the tide of the game in an instant. A hidden feature is the special sixth reel that contains only one symbol, a pearl that can trigger a massive jackpot or a deluge of extra spins!

4 Seasons, on the other hand, features cute animals that represent each sign of the Chinese zodiac. Surrounded by a serene garden landscape in which four seasons change as the game progresses, with every 30th spin, a symbol turns golden and multiplies wins 10 times! There are also Golden Lucky Cat Wilds and Yin Yang bonus spins that maximize wins.