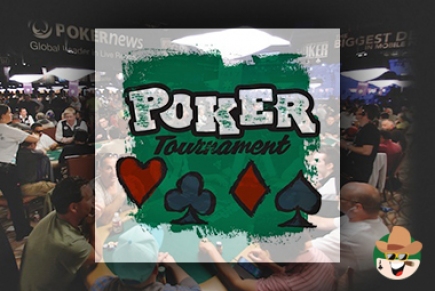 I don't know who came up with the name 'the bubble' to describe poker players who fall just short of making the final table in a tournament, but it's a good name.

A couple of weeks ago, I played in a tournament in Jacksonville, FL. We started out with 60 players and the final table, where all the money is, seats 11.

A young player who had amassed a big stack of chips and who thought he had a great chance of making that charmed circle suddenly found himself in trouble. He ran into two players who made miracle draws to decimate his stack. In disbelief, he tossed his remaining chips into a pot - and lost.

He hadn't made the bubble.

After the tournament, I had coffee with the kid whose name was Clint. He shook his head in anguish.

'Why can't I make the final table?,' he said. 'I get so close and then something happens and I lose. It's driving me crazy. It's almost like I'm jinxed.'

I offered a few words of consolation, but he was beyond consoling. All he wanted was a drink and an exit from the casino.

When I played in my first poker tournament in Lake Elsinore, CA. more than 40 years ago, I could not believe the excitement the tourney generated.

It was like I had plugged my finger into a wall socket. The electrical charge was so powerful; it literally made my hair stand up.

Unbelievably, I finished second and collected over $1,200. In the 1970s, that was enough money to pay for a week in Hawaii for my new wife, her mother and me. We had a marvelous vacation.

The victory made me feel I was invincible, especially in tournament play. I began playing in tournaments in California and Las Vegas on a regular schedule.

And I couldn't do a thing.

Like the young player I had talked to, I kept getting knocked out on the bubble. I would make it to the final two tables, and then would make a bad play that took all my chips. Grim-faced, I would head to the bar talking to myself.

It didn't happen just once, twice, three times or four times. I lost count when I got knocked out of my 11th tournament, just short of the bubble.

'What am I doing wrong?' I asked my opponents. They shrugged and told me I was a good player. Keep trying, they said. You'll make it eventually.

And eventually, I did. I won a tournament at The Orleans in Las Vegas. And then I won another. On one memorable day that will always stay with me, I won back-to-back tournaments at The Orleans and the Union Plaza.

For the past couple of months, I have been unable to make the final table in tournaments in Jacksonville and Hollywood, FL. I think I have been playing well, but in crucial moments, my hand has fallen short of the mark.

No problem. I have done it before and I know I can do it again. Busting the bubble isn't an accident. It's an art, and all good poker players are artists at heart.

I have come to realize that instinct counts in poker. Sometimes you can't take the time to think about a hand. You just see it and you make your move. Win or lose, it's a commitment and you will be right a surprising number of times.

Of course, there are times you will be wrong. When that happens and you lose your final chip, all you can do is shrug, smile and leave the table. You'll be back. You will always be back.
Live Poker Tournaments Back to articles