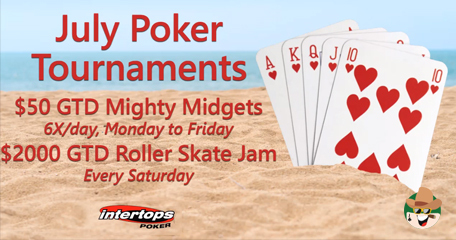 Intertops Poker has two big announcements for this week: one is in regards to the $2000 Slots Tournament that showcases Betsoft's most recent releases (open until July 7th) and the other one reminds all eager players of two new poker tournament series: $2000 Saturday Roller Skate Jams and $50 Mighty Midgets Tournaments.

“Betsoft’s games just keep getting better and better. We really wanted to show off the latest and greatest. From Mardi Gras to outer space – they’re quite a diverse bunch of games!”

...during which four new games will be a central highlight. Carnaval Forever, Fruitbat Crazy, Spinfinity Man and Viking Voyage are the titles on display, and until July 7th, players will earn tournament points playing these games.

Top sixteen players that manage to accumulate most points by Sunday night will win a share of a $2000 prize pool. The main prize is $400.

All four games can be found under the Betsoft tab in the download or instant-play casino. Players can earn one point for every spin and prizes must be rolled over at least once in order to be withdrawn.

Two Poker Tournaments to Light Up the Summer:

All throughout July, Intertops Poker will be hosting the $50 GTD Mighty Midgets Tournament every week from Monday to Friday and on Saturdays, there will be a $2000 GTD Roller Skate Jam Tournament.

"We’ve got lots of big tournaments with big prize pools on our schedule, but it’s summertime when the living is easy. So we thought lower buy-in Mighty Midgets tournaments would go down well with a lot of our players,” said Intertop's casino manager.

Until August 2nd, there will be, in total, six Mighty Midgets tournaments added to the schedule. Every two hours, there will also be standard Texas Hold'em and Omaha tournaments and Bounties, Turbos and Big Stacks. Bounty tourneys pay a $0.50 bounty for every player that get knocked out.

More details about this tourney can be found at poker room's designated Mighty Midgets page.

For those looking for higher stakes, there's the $2000 GTD Skate Jam Tournament every Saturday. Buy-in for this is only $30, but players can win a seat at the tabe in Gear Up free rolls and qualifiers.

Online Poker Tournaments Back to articles