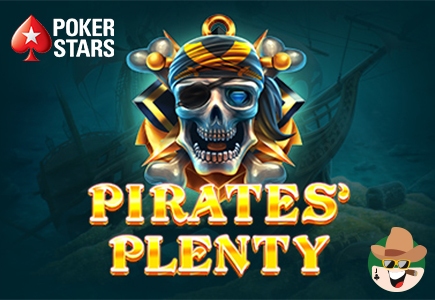 Prepare for an amazing adventure and join pirates in pursuit of sunken treasures in the latest slot release from Red Tiger Gaming, now available at one of your favorite poker sites.

Pirates' Plenty is the title and it welcomes you with unique features, available for real money play at the site. Take advantage of multiple wilds, casino spins, and a treasure reel.

Of course, the site we are talking about is the popular, PokerStars. But, let's dive right into the details of the slot. Red Tiger is well-known for state-of-the-art content with rich colours, powerful graphics and amazing animation. This particular title features just that, placed inside a ship with illuminating lamps on both sides. The game includes a selection of symbols like gold coins, card suits (including diamonds, clubs, hearts and spades), medieval pistol, captain's hat, pirate's skull and a bottle of grog.

The title includes three types of wilds including a random monkey wild, reel-tall ships in a bottle and extra wilds. The first two types appear in the base game while extra spins emerge in the Ocean casino spins round.

5 reels, 3 rows and 20 pay lines make up the slot. When the Treasure Reel is unlocked, the slot extends to six reels. To join the adventure, just make a wager between 0.20 to 100 coins per spin. If you match five symbols in a row, you can receive from 0.8x to 20x your bet. The award can increase up to 50x your bet when you match six symbols on the reels.

It also features an RTP of 96.12%. Players can take advantage of an autoplay function and set 10 to 100 consecutive spins.

The Treasure Reel symbol appears on the game window and is represented by an old map with treasure marks. During the game, you will unlock treasure positions for each placed bet. As soon as symbols land on the reels, the pirate ship moves forward. Before reaching the target, you need on average 200 spins. Each bet amount brings progress and the reels can increase to six. With six reels, wild bottles appear and become multiplied from x1 to x5.

Other interesting symbols include the wild monkey and ocean spins. The wild monkey appears randomly on any spin in the base game. The function of the monkey is to steal gold coins or low-value elements.

Ocean casino spins appear when three scatters land on active reels. The spins emerge on five reels with more bonus spins available when the treasure chest is unlocked. In addition, you can find the pirate captain symbol which brings an additional key award. When you unlock the first two chests, a low-value card symbol appears and transforms into a wild symbol. Players who collect three keys can unlock the final chest and release card symbols and receive an additional five casino spins.

Pirates' Plenty looks like a fun slot and the RTP is high.