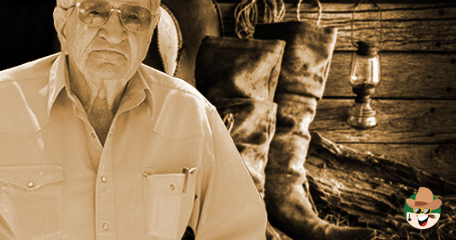 Max Evans is one of the few people in life who makes me jealous.

For one thing, he and I have both written many articles and short stories about the West I am referring to the Old West and the New West, which aren't really that much different.

But two of his stories, THE ROUNDERS and THE HI-LO COUNTRY, have been made into movies and NONE of mine have yet hit that mark!

Evans, who was born in Rope, TX., recently passed his 95th birthday. I won't tell you my age but it's considerably less than that.

He has rubbed elbows and shared drinks and swapped stories with Sam Peckinpah, Henry Fonda, Glen Ford, Woodie Harrelson, Chill Wills and many other legends of filmdom. While I have met Wills, Strother Martin and John Wayne...

...I have to admit Evans tops me in that department.

Evans is a true cowboy who grew up on a range. He made a living as a cowboy at age 14, being paid .75 cents a day while working on a 100,000-acre ranch. His wages were later boosted to $30 a month, standard fare for cowboys in those days.

As he grew into maturity, he held down other jobs:

He smuggled gold out of Mexico and became an artist before turning his talents to writing.

He created a couple of Western characters for his first major novel, THE ROUNDERS, which was a humorous Western. The main characters were Jim Ed Love played by Chill Wills and two roving cowboys portrayed by Glen Ford and Henry Fonda, although the real star of the novel was a bucking horse Called Old Fooler.

When I read THE ROUNDERS and saw the movie, I laughed myself silly! I was even inspired to write a short story called THE PINK SADDLE about a couple of cowboy partners who came up with a scheme to win an all-girls bull riding competition. One of them dressed like a girl and would have won the contest and $5,000 if the bull hadn't unraveled him and revealed his sex to the judges. 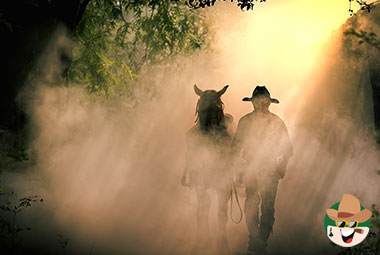 The magazine editor who bought my story, Bill Edwards, was a native of New Mexico. He said he was laughing so hard when he read my story that he could barely make out the check.

Evans was temporarily living at the Garden of Allah Ranch near Wickenburg, AZ. when I met him in the early 1980s. Like me, he was a gambler who liked nothing better than heading for Las Vegas and playing some poker and shooting dice.

He also enjoyed drinking and spent a lot of his time trying to outdrink Peckinpah and Chill Wills, which was next to impossible.

Peckinpah wanted to direct one of his stories. They spent a lot of time together and even worked on a couple of movie projects, but nothing came of it. Evans did write a book about their friendship. I don't know if it has been published, but it should be a good one since both of them admired the same things in life -- fast horses, loose women, hard liquor and gambling.

Evans even drank in some of my old watering holes. He met actor Lee Marvin in a lounge just outside Malibu, CA. once. I used to drink at Malibu's only two bars in the area, the Cottage and the Malibu Inn which were favorite gathering places for the Hollywood crowd. The Malibu Colony just down the highway was where film directors and actors lived in their mansions in a cove hidden from the public.

I hope Max Evans never stops writing. His words about cowboys and the West are real and he understands the humor of the West.