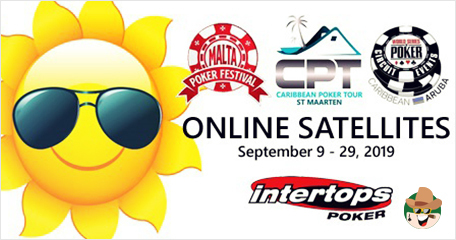 Even though the summer is about to come to an end, things are getting hotter and hotter at Intertops Poker. The venue is running three series of online satellite tournaments and the winners will score luxurious voyages to the Caribbean and the Mediterranean for fun in the sun and high stakes live competitions.

Starting September 9, Satellites for the €500K Malta Poker Festival are scheduled to begin. CPT St Maarten satellite tournaments are due for September 16th and participants can win their way to the WSOP Aruba in qualifying tournaments beginning September 23rd.

A hefty prize package that the winner of each series of satellites will receive includes buy-in for the Main Events in Malta, St Maarten or Aruba as well as top-quality accommodation and help with travel expenses. Players can buy in to the Final of each of these three-tier series or win their way to the Final by winning daily Step 1 and Step 2 tournaments.

Having a half-million Euro prize pool along with stunning Mediterranean location as mandatory ingredients made the Malta Poker Festival has quickly become one of the most significant poker events on the European poker circuit. Daily Step 1 tournaments begin September 9th and continue until the Final on September 15th where the $2500 prize package will be awarded.

As for the trip to the Caribbean, it will be awarded September 22nd in satellites that begin September 16th. Being in its fourth year now, the CPT St Maarten is a well-run tournament produced by TK Poker. The event is attractive to numerous professional, semi-professional and recreational players from all over the globe. Prize package is valued at $4500.

…heads to the beautiful island of Aruba November 21st. The action-packed schedule hosts 10 events, including the Main Event where the guaranteed prize pool is $250,000. Online satellites begin September 23rd and conclude September 29th, with a prize package of $3300.

In addition to some of the world’s best beaches and tropical nightlife, players will have the chance to check out some of the numerous cash games available during these events. A detailed schedule on each of the competitions can be found on the venue’s official page.

Intertops Poker dominates the busy Horizon Poker Network, welcoming all kinds of players from all over the world. They also have a casino games section with slots and table games from various content producers such as Betsoft, Worldmatch, and Lucktap. Aiming to maintain the consumers’ attention, the establishment rolls out a diversity of noteworthy promos regularly.

Live Poker Tournaments Back to articles