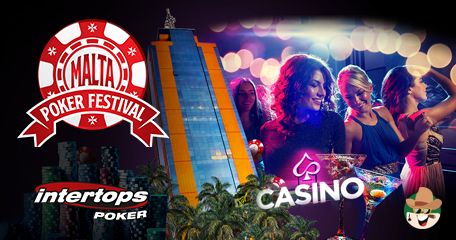 Players at Intertops Poker's satellite tournament can book their ticket to one of the most beautiful Mediterranean locations, Malta, whose Poker Festival, with its €500,000 GTD prize pool has made it a firm player favorite.

A group of online satellite tournament winners will be sent to take part in this tournament. The series of three begin with a first one on July 29th, which will last until Sunday's finals.

Intro For the Real Thing:

...while the third begins on August 26th. Each series winner will get a $2500 prize package with a buy-in for the Main Event at Malta Poker Festival. This includes five nights’ accommodations at five-star, Hilton Hotel, the only of its kind on this island, $500 pocket money for travel expenses and MPF VIP party passes.

Intertops' poker manager says: “This is a great opportunity to combine a wonderful trip with thrilling live poker tournament action. The main event will be live streamed so all your friends and family can watch!”

The Malta Poker Festival itself begins on October 30th at Portomaso Casino which is one of the hotspots of Malta's vibrant night life. On Monday, November 4th, the final table will be played and last year's winner was Emanuele Onnis from Italy who defeated Fabian Gumz. He won the MPF Grand Event trophy and the first-place prize of €150,000.

First level buy-ins cost $2 and they will win their way to the Final. There will also be one free roll and two Last Chance satellites that will also provide a route to the Final

Here is the breakdown and entire Intertops' satellite schedule:

1 ticket to any Step 2 awarded

Head out to Intertops' poker room lobby where you can register for the satellite under Tournaments tab. The first round of satellites for the $250,000 WSOPC Aruba begins August 5th.

Live Poker Tournaments Back to articles