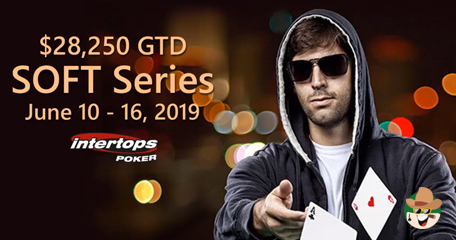 You are probably more than aware that Intertops Poker is the busiest site for all avid poker fans. The venue does more than a great job in keeping both, hardcore and those just getting started, well-occupied with numerous intriguing promotional offers…


… and competitions. The latest event they designed aims to give casual, recreational poker players a shot at some nice competition prize money. The busy poker room is running its second SOFT Series, June 10-16, 2019 with more than a generous total of $28,250 in prize money during the series.

The contest is expected to host 21 events starting with two freerolls on Monday (June 10th). The culmination of the competition is the Champions Tournament on June 16th. The winner of that match will get a $6,500 prize package to play in the European Poker Championships in Velden, Austria this summer.

The Main Event will be Event 21 – the Champions Tournament (June 16th, 6:30pm Eastern (June 17th, 12:30am CEST). The buy-in is $300 but each SOFT Series event winner will get a free ticket. Moreover, they’ll also get a SOFT Series Champion hoodie.

A Fair Shot for All:

Most SOFT Series buy-ins are just $5 or $10. Most games are NL Hold'em but there are a few Pot Limit Omaha events as well. The schedule includes two Turbo and three Six Max tournaments. Prize pools range from $500 GTD to $2000 GTD. Most events are tailored to North and South American players, but many are held earlier to suit European players as well. As far as Intertops Poker manager pointed out:

"We have a lot of players that are very serious about poker. They like high stakes cash games and tournaments. We have a fair amount of those. We created this series to give ALL players, professional and recreational, a fair shot at winning."

The online venue serves as the busiest poker room on the Horizon Poker Network and attracts all kinds of consumers from all over the world. Players can register for SOFT Series events under the Tournaments tab in the poker software.

As for the offerings in this digital establishment, most of the games available are lower stakes no-limit hold 'em with mid-stakes action, with PLO and PLO8 going at times. There is a variety of contest in the $50 range of buy-ins with solid guarantees. Moreover, SNG tournaments are also offered. Besides competitions as the biggest promotional value at this poker…

… the room comes in the form of tournaments, they have a variety of packages on a weekly or monthly basis, as well as some freerolls and lofty guaranteed prize pools.

Online Poker Tournaments Back to articles

As always, Intertops knows how to make a good deal!