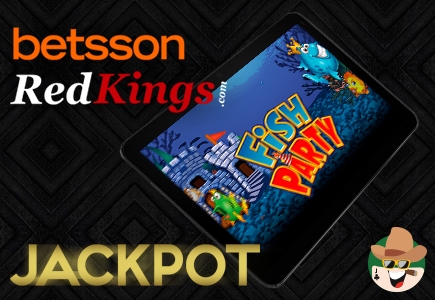 Microgaming’s Fish Party jackpot was struck on the provider’s Poker Network on 17 October, when a player at Betsson and two members of Redkings took part in the 3-seater Sit & Go Tour. The biggest win on the network, a massive €317,849.78 prize was hit just a few minutes after midnight with a €20 buy-in. The considerable money reward will now be shared among all three players, but the largest portion will go to SipsCommin, who won staggering €158,924.89... the other two punters, Check_Norris and grndonlck cashed in impressive €95,354.93 or soothing €63,569.96 respectively. Exciting Three-Handed Battle: The network has never seen such a thrilling three-handed contest since the game launched in 2016, according to Alex Scott, managing director at Microgaming. Scott commented: "What an exciting three-handed battle this was, congratulations to the winners! Our unique Fish Party progressive jackpot SNG has now awarded over €1.2 million in jackpot prizes, a milestone we are very proud of. At this rate it won’t be long until we hit two million! I can’t wait to see who the next winners are." Third Jackpot In The Last Three Months: Up until today, the Fish Party jackpot has been struck 22 times. It paid out more than €1.2 million in cash, whereby the latest win marks the third time the jackpot has been won in the last three months... on a grander scale, this is the ninth jackpot in 2018 on MPN, formerly known as the Microgaming Poker Network. Launched in 2003, MPN represents one of the longest-standing poker structures on the web, compatible and optimized for both desktop and mobile devices. Apart from multi-language features and customizable solutions, there are over 100 side games with variants such as Blaze Poker as well. Another key point is that the Network Management Board encourages operators to take lead role in structuring, making all tours as diverse as possible. Additionally, the network covers a collection of live tournaments from London, United Kingdom to Tbilisi, Georgia. The Chase Is On: Betsson and Redkings are not the only casinos under the network that offer guaranteed prizes with pots reaching up to €1 million. Online hubs like 32Red, GUTS, Paf, redbet, NordicBet and other also gather their members to create incredible tourneys and even bigger promos... One such ceremony is the fourth MPN Poker Tour on the beautiful island of Malta from 26th – 31st October. Players from all around the world are welcome but to win the €1 million prize, participants must first buy a package that includes entries for the main event, side events and a 5-night accommodation... head to the official site to learn more. Source: "Microgaming’s Fish Party €20 jackpot has been won at the highest prize pool ever". Microgaming. October 19, 2018.
Online Poker Tournaments Back to articles