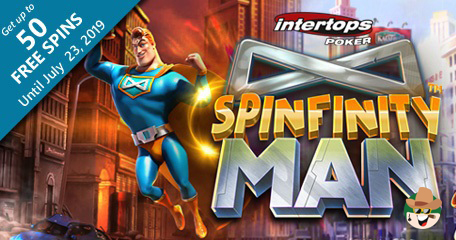 Betsoft's inventive team of storytellers, designers and engineers have devised yet another title devised to have us glued to our seats for the duration of summer – and beyond. The new feature-ridden game is called Spinfinity Man and it's getting its extended world premiere over at Intertops Poker!

Punters at this popular online place for poker purveyance will be able to take the game for a test spin AND get their hands on a juicy batch of bonus spins until June 23rd!

Spinfinity Man is a classic spin-off (pun very much intended, no worries) tale of the eternal battle of good and evil in superhero (and supervillain) form. His sworn nemesis, Mr. X, is up to all kinds of diabolical mischief...

...but his efforts fall short of the main characyer’s superior abilities and powers making sure the city of Metropolis stays safe and sound. But don't take our word for it, just ask Intertops Poker's casino manager:

“Superheroes and bad guys -- the characters in this game are a lot of fun! We’ve come to expect lots of fun AND amazing features from Betsoft, though, and this game is super fun and has super features!”

How the Bonus Spins Are Divided:

As a super treat when trying out something new, it's good to have a guarantee that you don't have to spend too much in order to gain...

...which is why Intertops conjured a whole lotta bonus spins to be had over the course of several days – in three batches, no less!

Given to all existing (logged in, funded) players, the spins bonanza begins with 10 extra spins with NO deposit required between June 17th and 19th. So yeah, totally free - and that's only the beginning:

For all deposits of at least $25 made between June 20th and 23rd, players will get another 30 extra spins if they use the coupon code, SUPER1.

Finally, the biggest batch of 50 extra spins – also available for all deposits between June 20th and 23rd, but with the minimum deposits of $50, are up for grabs with the code SUPER2. These come with a wagering requirement of 30x and a max cash-out of $300.

The new title, itself, has a 7x7 configuration and developer's unique cascading reels mechanics as well as exploding symbols feature which works...

...by having clusters of symbols explode in order to form winning combos. Winning symbols will drop from the grid and new symbols will cascade into places which creates more winning combination opportunities.

Whenever the main protagonist icon appears on reels, one of five superpower features can be triggered. Some of them are:

They will remove all other symbols and during the animation of the superhero taking a selfie with his female fan, Fan Girl (a superhero in her own right), Mr. X is taking the opportunity to come up with a hellish plan. When the bonus round is activated, the hero needs to follow the leads and catch Mr. X when the Mr. X meter is filled.