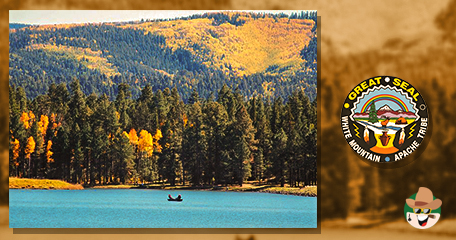 The White Mountain Apaches live on a reservation in southeastern Arizona that covers over a million acres of lush land. It ranges from 2,000 feet above sea level to over 12,000 feet on Mt. Baldy.

The White Mountain Apaches were never very warlike. When a U.S. Cavalry company marched on the tribe to kill or capture them, the Indians were so delighted to see the soldiers they turned out in big numbers to water and feed their horses as well as the men. Instead of war, the tribe turned the meeting into a celebration that humbled the troop and its leaders.

I was a reporter on the Phoenix Gazette in the early 1980s when my editor Vic Thornton assigned me to cover a colorful event on the reservation at San Carlos. The Apaches had scheduled dances and an Indian rodeo and Vic thought it would make a good story.

On a Saturday I loaded up my wife and two children and we drove the scenic route to the reservation about 80 miles east of Phoenix. When we arrived there, we found hundreds of Apaches in their colorful garb. They had stands along the highway selling pemmican, Indian fry bread, sopapillas, soft drinks and coffee.

I met the tribal chief and his council. They were friendly and the chief embraced me as well as my family. The chief's brother was a bronco rider and told me he was competing in the rodeo.

"I am also a dancer,' he said merrily. "We do a war dance. How would you like it if we kidnapped our children the way we did in the old days?" My children weren't close enough to hear what he had to say and I told him to go for it.

One of the other tribal members told me they also had a poker game scheduled and asked me if I wanted to play poker against them.

"It will just be the Apaches against you," he warned. "John Wayne won't be there to rescue you." I told him I would take my chances.

The Indians did their dances. Apaches wearing blackface masks swarmed around us and went through terrifying moves that culminated with them rushing up to my family and picking up Rossana and Dale and racing off with them. My kids were scared and screamed for help. The Apaches kept them for a few minutes and returned them later.

"They're intact," one of the Apaches said, grinning. "We didn't scalp them."

All my son Dale could say was, "Wow! Wait till I tell my friends at school what happened."

The rodeo was next. The Apaches roped calves, wrestled steers, and rodeo bucking horses and Brahma bulls. Two brothers mounted the same bronco and rode it, or tried to. When the horse threw them off, it looked like one Indian had split in half. It was great entertainment and well worth the price of admission.

When the rodeo ended, the Apaches served dinner -- mutton, steaks, beans and mashed potatoes -- at an outdoor setting. Nearby they set up a poker table. While my family dined, I played poker.

The Apaches played for fun rather than money. They were great bluffers and tested my skills on every level. I won less than 480 and afterward complimented them on their play.

"If you had been John Wayne, we wouldn't have taken it so easy on you," one of them joked.